We are delighted to be adding a new novel to our Designer Collection this November: Black Narcissus by Rumer Godden. This beautiful hardback edition features artwork from the V&A’s textile collection and a new introduction by novelist and screenwriter, Amanda Coe, whose sumptuous three-part adaption of Black Narcissus, filmed in Nepal and with a stellar cast, will air on BBC One.

‘Godden’s wonderful book sets out a complex vision of the variety, necessity and danger of desire, rendered into a story that is completely pleasurable. I envy anyone reading it for the first time’ – Amanda Coe

High in the Himalayas, the mountaintop palace shines like a jewel. Built for the General’s harem, laughter and music once floated out over the gorge. Now it sits abandoned, windswept and haunting.

The palace is bestowed to the Sisters of Mary, and what was once known as ‘the House of Women’ becomes the Convent of St Faith. Close to the heavens, the nuns feel inspired, working fervently to establish their school and hospital. But as the isolation and emptiness of the mountain become increasingly unsettling, passions long repressed emerge with tragic consequences . . .

‘A remarkable novel, one in a thousand’ – Observer

Rumer Godden (1907-98) was the acclaimed author of over sixty works of fiction and non-fiction for adults and children. Born in England, she and her siblings grew up in Narayanganj, India, and she later spent many years living in Calcutta and Kashmir. Several of her novels were made into films, including Black Narcissus, The Greengage Summer and The River, which was filmed by Jean Renoir. She was appointed OBE in 1993. Many of her novels, both for adults and children, are published on the Virago Modern Classics list.

The cover artwork has been created from a piece of cloth in the V&A’s collection – a Parsee girls shirt embroidered with silk thread, featuring birds of paradise, flowers and plants in white gold and red on a deep blue background, from Surat, Gujarat c 1870. 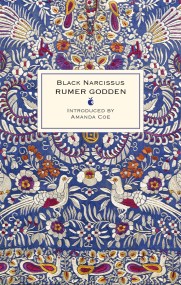