This May our Book of the Month is a tribute to Angela Carter, in the month which marks her 80th birthday – Carter was born on 7th May 1940. Shadow Dance is a disturbing and delicious tale of shattered beauty and male camaraderie which shows one of the 20th century’s greatest writers at the start of a dazzling career.

The scar drew her whole face sideways and even in profile, with the hideous thing turned away, her face was horribly lop-sided, skin, features and all, dragged away from the bone. She was a beautiful girl, a white and golden girl, like moonlight on daisies, a month ago.’

And yet the men still hover around her, more out of curiosity than lust, and none more so than the wildly seductive, dangerous funny man, Honeybuzzard; lithe as a stick of liquorice, he is the demonic puppet master at the swirling centre of the tale.

‘In a modern day horror story gleaming with perfect 1960’s detail, she performs a double act, conjuring up just the right amount of unease and perversion beneath the idiosyncratic business of relatively ordinary lives’  – The Times

Angela Carter was born in 1940.  One of Britain’s most original and disturbing writers, she died in 1992. 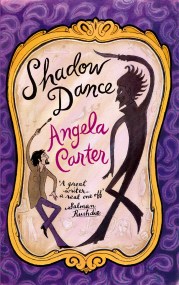