This April our Book of the Month is beloved children’s classic, The Secret Garden by Frances Hodgson Burnett. The Secret Garden is an unforgettable story of a surly orphan who comes to discover goodness, herself and the world around her – perfect escapism for these strange times we find ourselves living in.

The Secret Garden was first serialised in ten issues (November 1910 – August 1911) of The American Magazine, with illustrations by J. Scott Williams. It was first published in book form in August 1911 by the Frederick A. Stokes Company in New York; it was also published that year by William Heinemann in London.

The Secret Garden tells the story of Mary Lennox – a mischievous girl who is sent to Misselthwaite Manor to live with her uncle. Everybody at Misselthwaite Manor agrees that Mary Lennox is the most disagreeable child they have ever met. Pale, selfish and spoilt, the ten-year-old orphan has been sent from India to her uncle’s estate and she is determined to hate everything about it. But the isolated house on the Yorkshire moors holds secrets that Mary cannot resist exploring: pitiful crying that echoes down the corridors at night and a hidden walled garden. When a robin leads Mary to the buried key, not only is the garden unlocked, but also her heart. And as the garden blooms, for the first time in her life, Mary discovers friendship. This is where the magic begins . . .

‘Even the most cynical reader would be hard pressed to remain unmoved by The Secret Garden. There is an old-fashioned tenderness and joy to it; the sense that magic happens if you are observant and quiet and know it will’ – Sophie Dahl

Frances Hodgson Burnett was born in Manchester, England, in 1849 but moved to America in 1865 after her father died and her family fell on hard times. There she began writing stories to earn money and soon became a successful novelist, playwright, and children’s author. She wrote the classic novels, Little Lord Fauntleroy, A Little Princess and The Secret Garden. 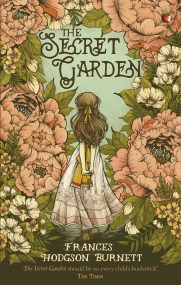 She put her hand in her pocket, drew out the key, and found it fitted the keyhole . . . she held back the swinging curtain of ivy and pushed back the door which opened slowly. Then she slipped through it, looking about her and breathing quite fast with excitement and wonder and delight. She was standing inside the secret garden'