Read an extract from The Secret Diaries of Miss Anne Lister, Vol. II

My involvement with the life of Anne Lister began with a visit to the Calderdale Archives one late autumn afternoon in 1984. Due to work and family commitments I had decided that any writing or research I wished to do must be centred upon a subject close to home. My mind immediately focused upon Anne Lister of Shibden Hall, Halifax. I knew that her letters were deposited in the archives and, on further enquiry, I found that her voluminous journals, extending from 1817 to 1840, were also held there. An added bonus was that they had recently been put on to microfilm and could be photocopied page by page, enlarged and taken home for in- depth study. This was essential, for Anne’s journals are a mixture of passages written in small, cramped handwriting – her ‘plainhand’, as she called it – alternating with passages written in a secret code of her own devising – her ‘crypthand’. The plainhand was far from ‘plain’ and needed deciphering as it was full of abbreviations and semi- archaic or near- obsolete English terms interspersed with French words and phrases, along with a smattering of Greek and Latin. But even more challenging was her elaborate crypthand – a mixture of Greek letters and symbols of her own devising. Luckily, I found that the code had been cracked by her descendent John Lister (1847–1933), the last Lister of Shibden Hall.

The key to the code, then, was available and I took a copy of it home with me, along with the first fifty pages of the journal. The next day I set myself the task of reading and decoding it. From that day to this I have found myself engaged in a literary, historical and cultural adventure, the interest of which never ceases. Halifax, for me, became two different places: physically, I moved around in my modern hometown; mentally, I lived in Anne Lister’s small nineteenth- century market town. Similarly, I travelled to twentieth- century Paris for research – but it was Anne’s nineteenth- century Paris that I uncovered, emotionally and psychologically, the spirit of which I have attempted to portray in this book through the excerpts I have chosen.

The process of selection from 7,722 pages of Anne’s journals, containing an estimated 4,633,200 words, was not easy. The writing of a diary isn’t comparable to the writing of a novel as the diarist, obviously, does not know in advance what is going to happen and what will be significant. Anne scrupulously recorded every day’s events as fully as possible but, although fascinating for a historian, the minutiae of each day is less engrossing for the general reader. It is therefore the task of the editor to sift through the mass of material, teasing out key themes and highlighting the most pertinent experiences that will allow the diarist to tell her own story in her own authentic voice.

Selecting and editing excerpts from the private diary of an unknown person was a complex process as I had no preformed idea of what sort of person was likely to emerge, or what her story might be. My knowledge of Anne Lister was confined to the bare fact that she had once lived at Shibden Hall, a place to which I was taken as a child many times by my parents and to which I took my own children in turn. Short extracts of her diaries had been published from time to time in the local press to illustrate historical events in Halifax, but Anne’s lifestyle and personality – and, indeed, her sexual orientation – were unknown to me until I studied her journals.

After a period of two years’ reading and decoding, I knew that the uniqueness of the material lay in the depiction of how a woman in the first half of the nineteenth century could live her life and satisfy her emotional and sexual needs when she could ‘love, and only love, the fairer sex’. How did a lesbian conduct her life during an era so radically different from our own, managing to balance sexual fulfilment with social acceptability? Anne’s secret journal tells us. My decision to share Anne Lister’s story with the world was not taken lightly; having spent so long decoding her intimate diary, I felt an affinity with her – I was her confidante across the centuries – and she would have hated her private life being made public. Yet I remain convinced of the importance of gaining a new insight into the mores of women’s lives and sexuality. I know now that enabling readers to discover this piece of lesbian history had a positive impact on many: as Jeanette Winterson commented, ‘The diaries gave me courage.’

I made the decision to create two volumes of the diaries for publication: the first, I Know My Own Heart, covers the years 1817–1824 and tells the story of the clandestine, long- running love- affair between Anne and her married lover, Mariana Lawton (with the ineffectual figure of Charles Lawton hovering in the background); the second, No Priest But Love, follows straight on chronologically, detailing Anne’s sojourn in Paris and her infatuation there with a young widow, Maria Barlow.

I Know My Own Heart was published in 1988, the year that Section 28 was enacted, the controversial law that forbade local councils and schools to promote or teach the acceptability of homosexuality. As I was then employed as a teacher in a Catholic school, I was worried about whether my employment would be terminated when the contents of my book became known. Fortunately, the headmaster, an Oxbridge classicist who was very aware of the importance of the Anne Lister journals, reassured me on that point. His comment, ‘You have lit a slow fuse,’ has stayed with me to this day.

This second volume followed in 1992 under the title No Priest but Love and takes place mainly in Paris during the Restoration of the Bourbon monarchy period. In an attempt to recover from her heartbreak over Mariana’s marriage, Anne stayed in Paris from the beginning of September 1824 until the end of the following March and revisited the city in autumn 1826. Set against a backdrop of political intrigue and cultural revival, Anne’s love affair with Maria Barlow provides an absorbing social and sexual drama, which not only brings Paris vividly to life but provides an astonishingly intimate insight into the explicit love life of two

women who became entangled in a compelling and complex relationship.

I made the decision to exclude some material which, although interesting and of historical importance, has been well documented elsewhere. For instance, Anne’s descriptions of the tourist sights in and around Paris cover the same ground as many other English diarists of the period who visited the city. It is only where I felt that Anne witnessed an event, rather than

a place, of historical importance that I have relaxed my rule: for example, the entry of Charles X into Paris to be proclaimed

the new king of France. I have also included instances where Anne’s observations were of particular interest or sharpness during her sightseeing expeditions, revealing certain aspects of her character.

Other deletions concern long and detailed accounts of work done on the Shibden estate when Anne returned from Paris as their inclusion isn’t relevant to the main theme of this book. I have, however, included sufficient material to indicate Anne’s altered lifestyle and degree of responsibility for managing the estate after her uncle died and she became the mistress of  Shibden Hall. The placing of the three- point ellipsis ( . . . ) in any part of an extract from the journal signals the deletion of the type of material outlined above and has also been used to delete repetitive material. I have used italics to distinguish the ‘crypthand’ passages from the ones written in ‘plainhand’.

Thirty- five years have elapsed since I began transcribing these diaries. Released from the obscurity of the archives, Anne Lister emerged as one of the most charismatic characters any historian could hope to find. Her life has been celebrated on stage and screen and she is now recognised as ‘the first modern lesbian’. Thousands of people from all over the world visit Shibden Hall and make a pilgrimage to Holy Trinity Church in York where Anne and her lover Ann Walker took the sacrament together to seal their union. In 2011 her monumental diaries were recognised by Unesco as a ‘pivotal document’ in British history and added to the register of the UNESCO Memory of the World Programme. The register citation notes that, while a valuable account of the times, it was the ‘comprehensive and painfully honest account of lesbian life and reflections on her nature, however, which have made these diaries unique. They have shaped and continue to shape the direction of UK Gender Studies and Women’s History.’ The diaries are now internationally known – their profound impact on many lives has made Anne Lister a global icon whose place in history is secured for posterity. 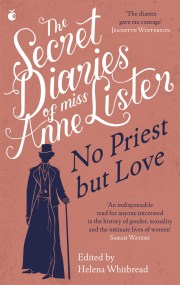 Anne Lister (1791-1840) was one of the most remarkable women of her time. Fearless and uncompromising, she was
determined to live life on her own terms, both financially and sexually. She wrote extensive diaries in 'crypthand', which
allowed her to record her life in intimate, and sometimes explicit, detail. When they were decoded by Helena Whitbread, lesbian history was changed for ever. This is the second volume of her diaries.

No Priest But Love begins in 1824. After an ill-fated love affair with a married woman, Anne Lister embarks on a journey alone to post-revolutionary Paris, a city alive with political intrigue. Here, she becomes romantically involved with a young widow, a relationship at odds with her social ambitions. Anne's efforts, firstly to extricate herself from this new 'scrape' and then to make a choice between the two women in her life, provides an absorbing sexual and social drama.