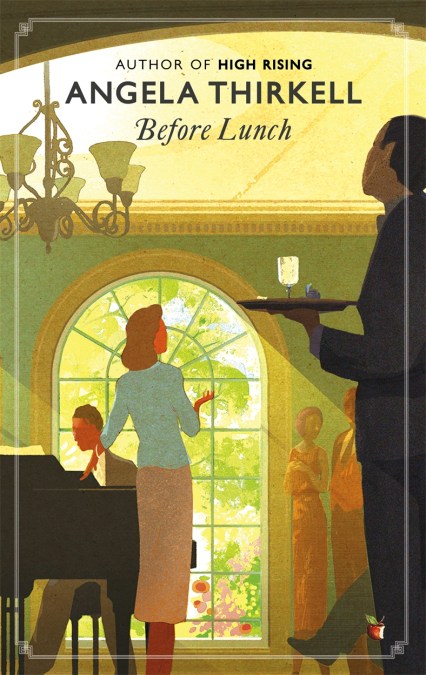 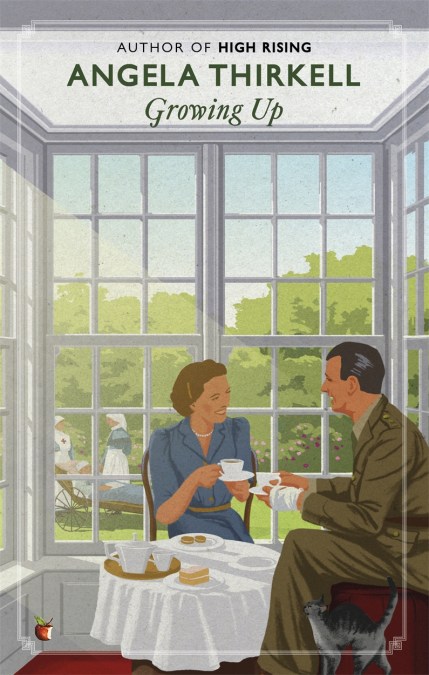 by Angela Thirkell
Barsetshire in the war years. Growing Up is the story of ladies, gentlemen, and their irrepressible children keeping the war at bay in their country town. Trying to do their part as the Second World War ravages Europe, Sir Harry and Lady Waring open their estate to convalescing soldiers – bringing romance, drama, and subtle life lessons to the Warings’ young niece and her friends. 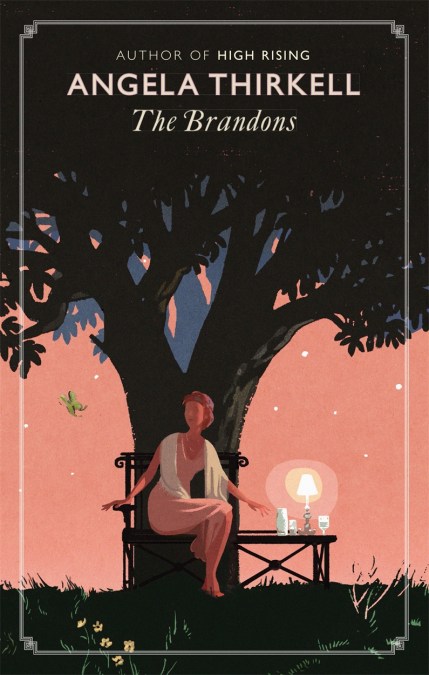 by Angela Thirkell
Lavinia Brandon is quite the loveliest widow in Barsetshire, blessed with beauty and grace, as well as two handsome grown-up children, Delia and Francis. So thinks their cousin Hilary Grant when he comes to stay and – like many before him – promptly falls for his fragrant hostess. Meanwhile, the Brandons’ ill-tempered dowager aunt is stirring up controversy over her legacy, and Lavinia’s attention is further occupied by the challenges of making a match between the vicar and gifted village helpmeet Miss Morris, and elegantly deterring her love-struck suitors. Angela Thirkell’s 1930s comedy is bright, witty and winning. 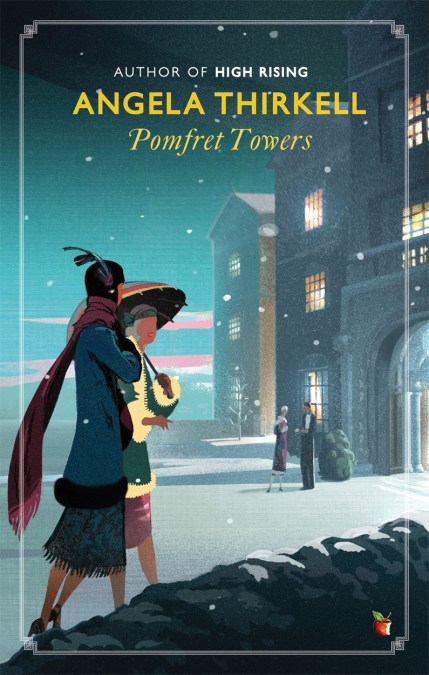 by Angela Thirkell
Pomfret Towers, Barsetshire seat of the earls of Pomfret, was constructed, with great pomp and want of concern for creature comforts, in the once-fashionable style of Sir Gilbert Scott’s St Pancras station. It makes a grand setting for a house party at which gamine Alice Barton and her brother Guy are honoured guests, mixing with the headstrong Rivers family, the tally-ho Wicklows and, most charming of all, Giles Foster, nephew and heir of the present Lord Pomfret. But whose hand will Mr Foster seek in marriage, and who will win Alice’s tender heart? Angela Thirkell’s classic 1930s comedy is lively, witty and deliciously diverting. 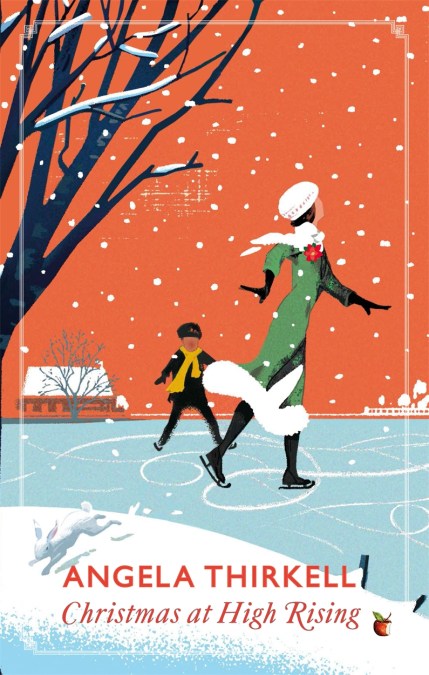 by Angela Thirkell
Originally published in the 1930s and 1940s and never before collected, these stories by the incomparable Angela Thirkell relate merry scenes of a trip to the pantomime, escapades on ice, a Christmas Day gone awry, and an electrifying afternoon for Laura Morland and friends at Low Rising, not to mention the chatter of the arty set at a London private view. Charming, irreverent and full of mischievous humour, they offer the utmost entertainment in any season of the year. 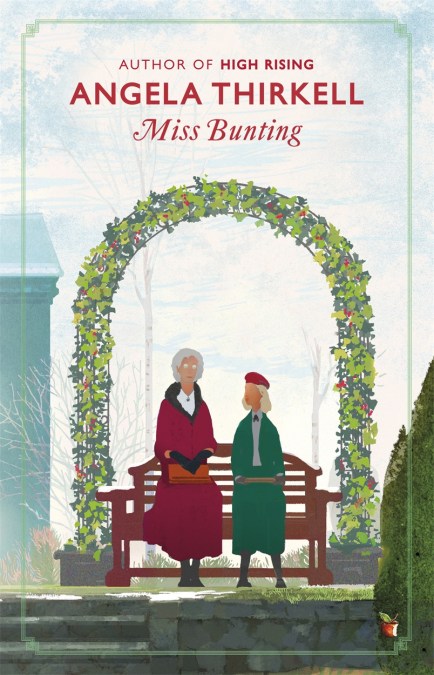 by Angela Thirkell
Barsetshire in the war years. Miss Bunting, governess of choice to generations of Barsetshire aristocracy, has been coaxed out of retirement by Sir Robert and Lady Fielding to tutor their daughter Anne, delicate, sixteen years old, and totally lacking in confidence.

When Anne makes friends with Heather Adams, the gauche daughter of a nouveau riche entrepreneur, her mother is appalled. Miss Bunting, however, shows an instinctive understanding of the younger generation – perhaps, having lost so many of her former pupils to the war, she is more sympathetic to their needs. She may be a part of the old social order, where everyone knows their place, but is wise enough to realise that the war has turned everything on its head and nothing will ever be the same again – even in rural Barsetshire.
First published in 1945, Miss Bunting is a charming social comedy of village life during the Second World War. 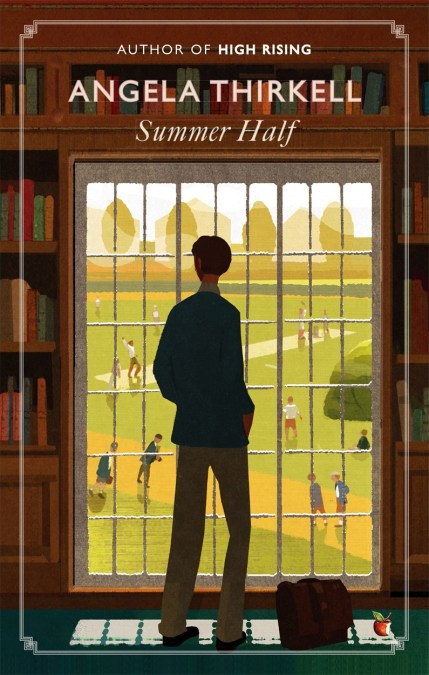 by Angela Thirkell
To his parents’ dismay, Colin Keith – out of the noble but misplaced sense of duty peculiar to high-minded young university graduates – chooses to quit his training for the Bar and take a teaching job at Southbridge School. Little does Colin imagine that he will count among his pupils the demon in human form known as Tony Morland; or that the master’s ravishing, feather-brained daughter Rose will, with her flights of fancy and many admirers, spread chaos throughout school and village. Humorous, high-spirited and cleverly observed, Summer Half is a comic delight. 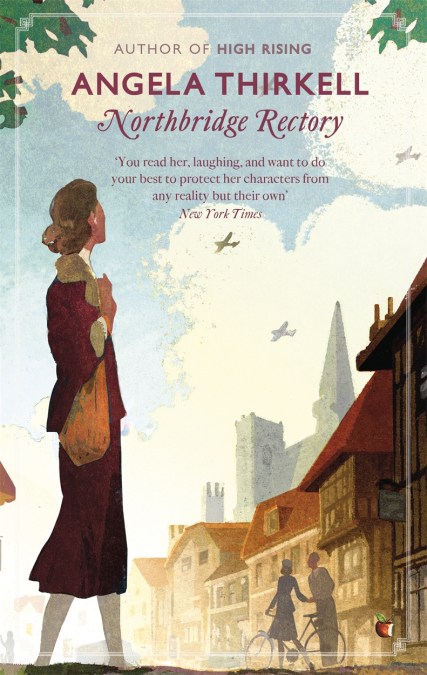 by Angela Thirkell
As the war continues it brings its own set of trials to the the village of Northbridge. Eight officers of the Barsetshire Regiment have been billeted at the rectory, and Mrs Villars, the Rector’s wife, is finding the attentions of Lieutenant Holden (who doesn’t seem to mind that she is married to his host) quite exhausting. The middle-aged ladies and gentlemen who undertake roof-spotting from the church tower are more concerned with their own lives than with any possible parachutist raids. There is the love triangle of Mr Downing, his redoubtable hostess Miss Pemberton and the hospitable Mrs Turner at the Hollies. And, to add to Mrs Villar’s woes, egocentric, imperious Mrs Spender, the Major’s wife, is foisted on the rectory when she is bombed out of her London home.

First published in 1941, Northbridge Rectory is a captivating comedy of an English village in the War years. 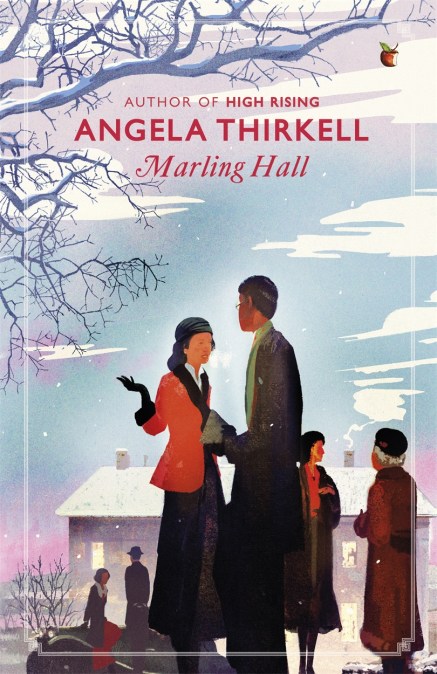 Mr Marling, of Marling Hall, has begun to accept – albeit reluctantly – that he will probably never be able to pass his wonderful old estate on to his children. The Second World War is bringing an end to so many things, but the Marlings carry on as best they can in the face of rationing and a shortage of domestic help.

Into their world arrive Geoffrey Harvey and his sister Frances, who have been bombed out of their London home. Bohemian and sophisticated, they rent a local house, and it is not long before they begin to have an effect on their neighbours. Geoffrey begins to court Lettice, the Marlings’ widowed daughter, but he finds he has rivals for her affections in dashing David Leslie and Captain Barclay. Observing everything and quietly keeping events on an even keel is the Marlings’ sage old governess, Miss Bunting.

‘The novels are a delight, with touches of E. F. Benson, E. M. Delafield and P. G. Wodehouse’ Independent on Sunday 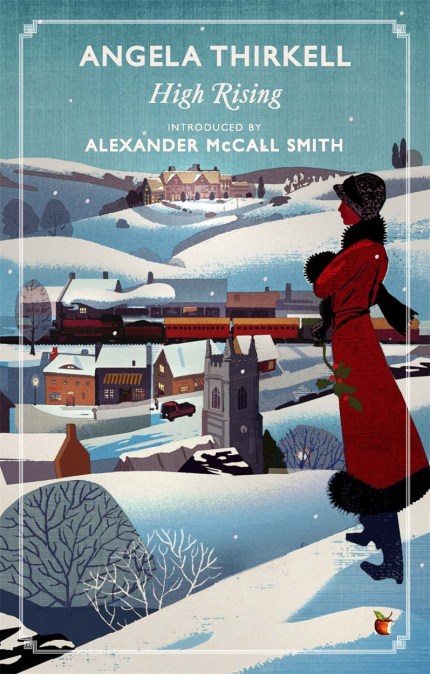 by Angela Thirkell
Successful lady novelist Laura Morland and her boisterous young son Tony set off to spend Christmas at her country home in the sleepy surrounds of High Rising. But Laura’s wealthy friend and neighbour George Knox has taken on a scheming secretary whose designs on marriage to her employer threaten the delicate social fabric of the village. Can clever, practical Laura rescue George from Miss Grey’s clutches and, what’s more, help his daughter Miss Sibyl Knox to secure her longed-for engagement? 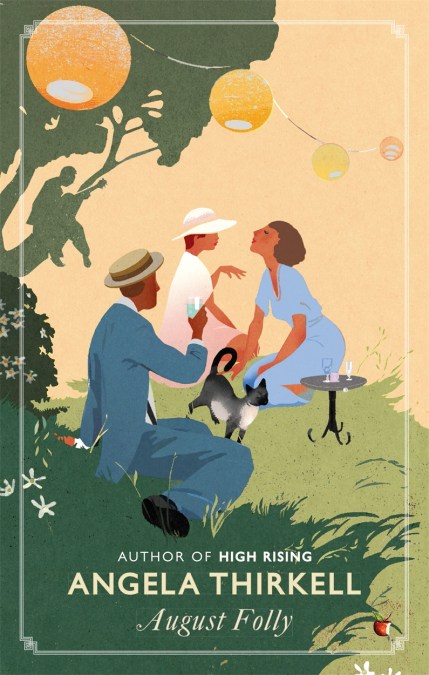 by Angela Thirkell
Angela Thirkell is perhaps the most Pym-like of any twentieth-century author, after Pym herself – Alexander McCall

It’s August in the Barsetshire village of Worsted, and Richard Tebben, just down from Oxford, is contemplating the gloomy prospect of a long summer in the parental home. But the numerous and impossibly glamorous Dean family – exquisite Rachel, her capable husband and six of their nine brilliant children – have come for the holidays, and their hostess Mrs Palmer plans to rope everyone into performing in her disastrous annual play. Surrounded by the irrepressible Deans, Richard and his sister Margaret cannot help but have their minds broadened, spirits raised and hearts smitten. 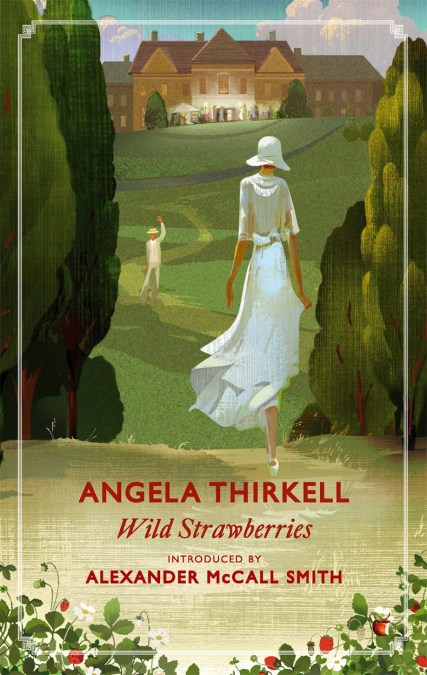 by Angela Thirkell
Pretty, impecunious Mary Preston, newly arrived as a guest of her Aunt Agnes at the magnificent wooded estate of Rushwater, falls head over heels for handsome playboy David Leslie. Meanwhile, Agnes and her mother, the eccentric matriarch Lady Emily, have hopes of a different, more suitable match for Mary. At the lavish Rushwater dance party, her future happiness hangs in the balance . . . 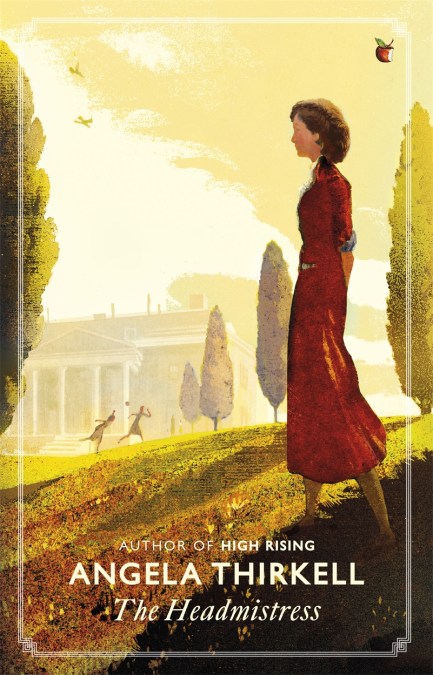 by Angela Thirkell
Barsetshire in the latter years of the Second World War is a peaceful and gossipy place, but there has been one lively change. A girls’ school, evacuated from London, has taken over Harefield Park. Miss Sparling seems to be the perfect headmistress: she dresses as a headmistress should and is an easy and erudite conversationalist. Her new neighbours like her and her pupils respect her, but there is something missing from her life; something which – though she never dreamt it when she arrived – perhaps Barsetshire can provide… 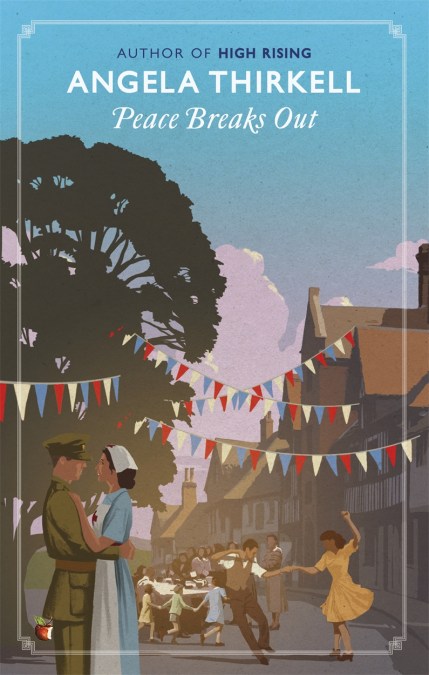 It is 1945. When peace breaks out at last, familiar wartime routines are interrupted, and the residents of Barsetshire seem as disconcerted as they are overjoyed.

As the country’s eligible young men return home, life regains momentum: before long, everyone is spinning in a flurry of misunderstandings and engagements. The older generation, though, sees that the world will never be the same again.

Both wry and poignant, Peace Breaks Out was written in the tumultuous year in which it is set. It is an unforgettable portrait of the joy and misgivings felt in the final days of the Second World War. 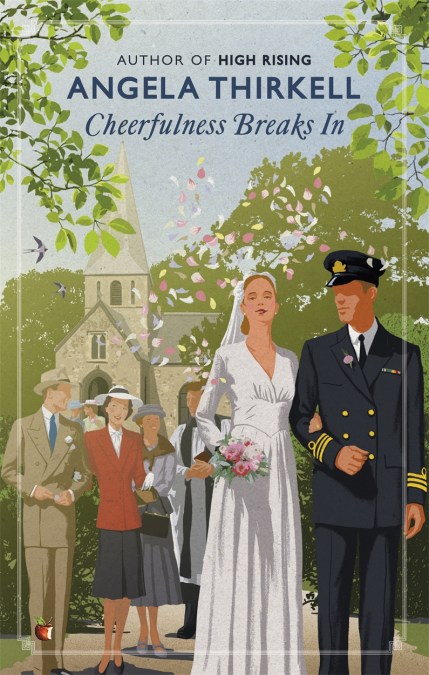 It is summer 1939 and the social event of the year is about to take place: Rose Birkett, a flighty beauty with a penchant for breaking engagements and hearts, is finally getting married, and the whole village – especially her parents – breathes a sigh of relief.

By autumn, however, summer weddings seem a distant memory as war reaches Barsetshire. While the younger generation throws itself into the war effort with cheerful aplomb, older residents remember the last war keenly, and are fearful.

When an entire London school of evacuees arrive, as well as a number of refugees, the village rallies round to accommodate them. Some inhabitants, though, fail to welcome the newcomers with open arms.

First published in 1940, this is a humorous and poignant picture of wartime in a rural community.
Next Page