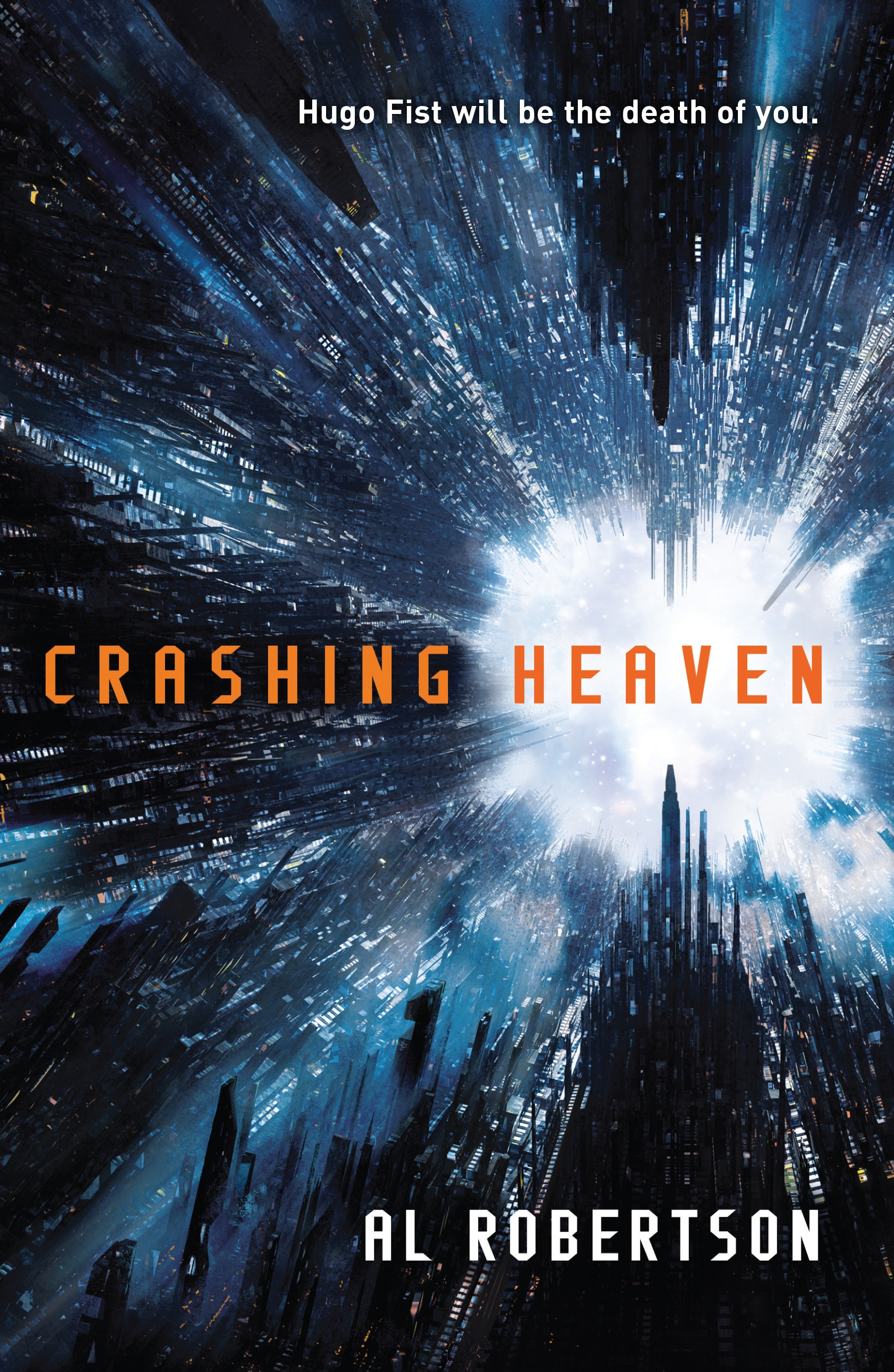 We are delighted to welcome Al Robertson to the Gollancz Blog for a special guest post on ventriloquist dummies and how they relate to his epic debut novel Crashing Heaven. Crashing Heaven is the story of  an abandoned Earth. Humanity resides on Station, an industrialised asteroid run by the sentient corporations of the Pantheon. Under their leadership a war has been raging against the Totality – ex-Pantheon AIs gone rogue. With the war over, Jack Forster and his sidekick Hugo Fist, a virtual ventriloquist’s dummy tied to Jack’s mind and created to destroy the Totality, have returned home. . .  Ready to find out more about Hugo Fist?

Hugo Fist is a ventriloquist’s dummy. Like all the best dummies, he has a very strong mind of his own. He marched into Crashing Heaven in a very fully formed way and went on to remould it around his own needs and desires.

While I was writing him I drew inspiration from many other puppets. Some of them gave me a better understanding of Fist and his relationship with Jack Forster, his human counterpart. Others helped me imagine what it means to be a short wooden person in a (mostly) human world.

Here are four of my favourites:

Hugo Fitch has haunted me for decades. He’s a character in one of the segments of 1945 portmanteau horror movie, “Dead of Night”. The whole film is fantastic, a sequence of wonderful, atmospheric, understated frights, but the section in which we meet Hugo really stands out.

First of all, a brief summary. Brilliant young ventriloquist Maxwell Frere has a difficult relationship with his dummy, Hugo Fitch. Professionally, they’re doing very well, but Maxwell’s worried that Hugo might leave him. Maxwell’s acquaintance Silvester, another ventriloquist, worries for his sanity and tries to help. Maxwell thinks that Silvester is stealing Hugo and shoots him. He’s imprisoned, leading to:

There’s a lot of Hugo Fitch in Fist. Both are aggressive, arrogant, self-interested and very difficult to live with. Both have very adversarial relationships with their human counterparts. And both want the one thing they can’t have – to live life on their own terms.

The big difference between them is genre. Hugo Fitch is a horror dummy. He’s terrifying because he’s either a symptom of Maxwell’s psychological disintegration or a supernaturally independent entity in his own right, or perhaps even a combination of both. When we look at him we see something that breaks our sense of the stability and order of the world.

By contrast, Hugo Fist is a science fiction dummy. He’s terrifying because he’s a (more or less) psychotic military AI. He doesn’t threaten Jack or the world of Station in the way that Hugo Fitch threatens Maxwell and our sense of our world. Crashing Heaven isn’t a story about a breakdown or supernatural beings, even though it contains broken people and the dead rise and walk again.

He also represents ideas that Hugo Fitch never could. One of the things that helped me understand that was another ventriloquist’s dummy. This time, it’s a real one – Stookie Bill, the first ever TV star.

Stookie Bill was John Logie Baird’s ventriloquist’s dummy. He’s just a head, but he played a very important role in the history of technology, because in 1924 his lightly smouldering face was the first image ever seen on television. Here he is.

Baird had to use a dummy because his lighting rig was too hot for a person to bear, and in any case the detail of the human face was too subtle to show up on his low contrast transmission set up. It’s interesting that, from the word go, television found the artificial easier to deal with than the real.

Stookie Bill is a cult object for the dummies of Crashing Heaven. They regard him as their first, virtual precursor and they worship him as a god. I’m not sure how much he’s done much for them, but he helped me a lot.

Thinking about him helped me realise how effective a symbol of technology a ventriloquist’s dummy is. It’s an inert thing with no independent existence, but once animated by a human user it takes on an unpredictable and very often uncontrollable life of its own.

And that sense of trying to manage the uncontrollable led me to my next puppet – the Jester from Jan Svankmajer’s astonishing retelling of Faust.

Jan Svankmajer’s Faust is another film that’s possessed me ever since I first saw it. It’s a profoundly surreal, wonderfully inventive reworking of the life and death of Dr Faustus. Even before we get to Hugo, it had a big influence on Crashing Heaven.

In part, Crashing Heaven’s a retelling of the Faust story. Jack Forster is Faust and Fist is Mephistopheles. The software licensing SNAFU that’s about to wipe Jack’s mind and give Fist his body is a digital version of the deal Faust did with the devil – seven years of power, then all is lost.

And of course the Faust story itself is one more way of thinking about technology. With great knowledge comes great power. But, sooner or later, it’s time to pay the bill. The devil always collects his due – something we as a culture might be about to discover, as our ecosystem continues its technology-driven crash.

Anyway, that’s a very large scale view of Faust. You also need a firm grasp of the details to make things really convincing, and that’s what I got from Svankmajer in particular. When I watched his Faust, I was fascinated by the Jester because of the way he’s so physically present. Here he is in action:

The little details of his movement – the rattling mouth, the tap-tapping of wooden feet, the awkward movement of wooden joints – all fed into Hugo Fist. Watching him and the devil he’s summoned helped me understand how to make Fist seem like an absolutely real presence.

But what about the more emotional side of things? That’s where our final set of ventriloquist’s dummies come in…

Amongst many, many other remarkable things, Ken Campbell was an excellent ventriloquist. Nina Conti learned the art from him and became a remarkable ventriloquist in her own right. But she began to feel that she’d taken the art as far as it could go. She was just winding up to tell him this when – alas – he died.

And then she found out that he’d left all of his dummies to her. Having been his pupil she’d become his sole ventriloquial heir. She wasn’t sure what to do next. She ended up making “Her Master’s Voice”, a documentary in which she takes his various puppets to an American ventriloquist’s convention while trying to come to terms with both her grief and her mentor’s legacy.

It is a devastatingly brilliant film – wildly funny, uplifting in a very honest way and profoundly sad. It’s also a wonderful exploration of the close relationships a ventriloquist of genius can have with her puppets.

Watching it was a very moving experience. I only saw it after I’d pretty much finished Crashing Heaven. So, rather than an influence, it was more of a confirmation. Jack and Fist’s relationship changes and deepens as the book goes on. Understanding Nina Conti’s relationships with her own puppets gave me confidence that I’d hit the mark. I’d managed to capture at least some of the closeness that can develop between a ventriloquist and their puppet. And here’s a lovely example of that to end with:

Intrigued? Crashing Heaven is out today in trade paperback. You can pre-order the eBook from all UK eTailers for just £1.99 until the 2nd July.You can read the first chapter of Crashing Heaven here. You can find out more about Al Robertson by visiting his website or following him on Twitter.